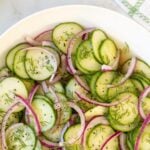 Crisp sliced cucumbers and onions are tossed in a simple seasoned vinegar mixture in this light and refreshing Cucumber Onion Salad. It’s a classic summer side dish that’s so EASY to prepare using simple ingredients.

It’s no secret that I LOVE cucumber salads. I’ve made several variations including Greek Cucumber Salad, German Cucumber Salad and even Thai Cucumber Salad… but I’ve never shared this old fashioned cucumber and onion salad which is the simplest of them all.

But don’t let the simple and basic ingredients fool you – this salad packs some serious flavor!

Step 1: Toss the sliced cucumbers and onion in a large bowl.

Step 2: Whisk together vinegar, salt, pepper, water and sugar in a small bowl or measuring cup.

Step 3: Drizzle the vinegar mixture over the cucumbers and onion and toss to coat as evenly as possible. Sprinkle with fresh chopped dill. Cover and refrigerate until ready to serve.

I prefer this served within a few hours of preparing, but it can be made ahead and served up to 24 hours after preparing. 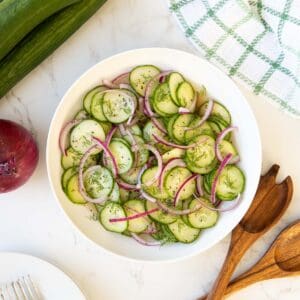